July 8, 2020 • The German Press Agency says sausage vending has gotten popular, especially in places where butcher shops close early. The country has more than a half million machines selling things like bratwurst. 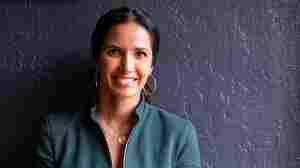 Top Chef host Padma Lakshmi began collecting cookbooks and recipes in her teens. In the new Hulu series, Taste the Nation, she travels the country to learn how foods from different cultures contributed to American cuisine. Dominic Valente/Hulu hide caption

Padma Lakshmi, Model, Actor And TV Host, Says Above All, She's A Writer

July 6, 2020 • The Top Chef host started out as a model/actress, never intending to have a career in food. But she loved to cook and to write down recipes. Her new show, Taste the Nation, explores immigrant cooking.

Padma Lakshmi, Model, Actor And TV Host, Says Above All, She's A Writer 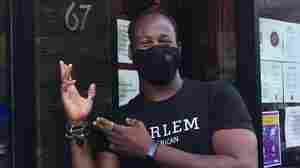 July 5, 2020 • 67 Orange Street makes do with take-out and outdoor service while waiting for a decision on inside dining in NYC. 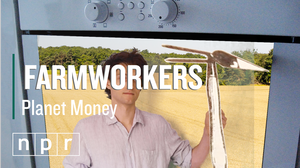 Grocery shopping the first few weeks of this crisis was insane (and frankly, it's still pretty nuts now). Shelves were empty. People were trying to buy up tons of stuff because no one knew what was going to happen; so demand was way up, but supply was the same. NPR hide caption

What's A Cooking Show Without Any Food?

July 1, 2020 • If there are more outbreaks on farms, there might not be enough healthy farmworkers to pick food. What might a cooking show look like without any food? 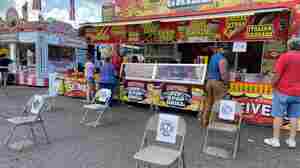 Have A Corn Dog: Fair Food Without The Fair

June 30, 2020 • In Western Pennsylvania, fair food vendors serve up the funnel cakes outside the fair grounds.

Have A Corn Dog: Fair Food Without The Fair

June 29, 2020 • A lot more Americans seem to have taken up baking since the pandemic began. Maggie Perry, on the team that answers King Arthur Flour's Baker's Hotline, reveals what people ask. 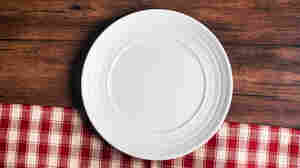 Author Susan Burton struggled with disordered eating for decades. "Hunger was something that I believed protected me and gave me power," she says. Anna Kurzaeva/Getty Images hide caption

From 'Empty' To 'Satisfied': Author Traces A Hunger That Food Can't Fix

From 'Empty' To 'Satisfied': Author Traces A Hunger That Food Can't Fix

German Post Office Evacuated Because Of A Smelly Package

June 23, 2020 • The parcel that caused the evacuation at a Bavarian town's post office contained durians — pungent fruit from Southeast Asia. The smell of the fruit is so bad that it is banned in many places.

German Post Office Evacuated Because Of A Smelly Package

June 22, 2020 • NPR's Ari Shapiro speaks with Alex Abad-Santos, a senior writer for Vox, about a lack of diversity among chefs, writers and reviewers in the food world. 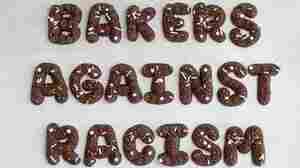 Across the world, bakers are selling treats to profit charities that support Black lives. Home baker Liz Rosado created these cookies as part of an announcement that she was participating in the event. Courtesy of Liz Rosado hide caption

June 20, 2020 • Thousands of professional and home bakers around the world are participating in virtual bake sales to benefit charities that support the lives of Black people. 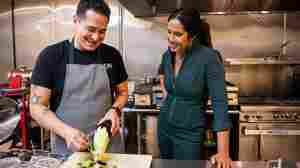 'Taste The Nation' Proves Who's At The Heart Of American Food: Immigrants

June 18, 2020 • Top Chef host Padma Lakshmi is on a new journey, from familiar places like San Francisco's Chinatown to the lesser-known Little Lima in New Jersey — all places where immigrants shape America's food.

'Taste The Nation' Proves Who's At The Heart Of American Food: Immigrants 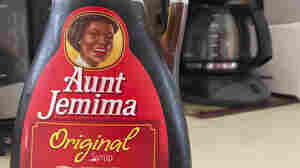 June 17, 2020 • Quaker Foods is retiring the name and logo of its 130-year-old pancake and syrup brand. Uncle Ben's and Mrs. Butterworth's also plan to change their packaging and marketing. 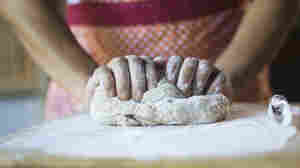 Prices for baking flour and eggs have fallen, suggesting an easing in the baking craze that gripped hungry and housebound consumers in the early weeks of the coronavirus pandemic. Karin Dreyer/Getty Images/Tetra Images RF hide caption

The Great Pandemic Bake-Off May Be Over

June 16, 2020 • The price of baking flour has fallen along with the price of eggs, suggesting an easing in the baking craze that gripped hungry and housebound consumers in the early weeks of the coronavirus pandemic.

The Great Pandemic Bake-Off May Be Over 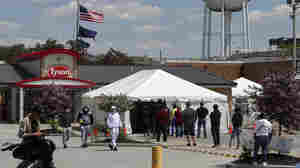 Workers line up to enter a Tyson Foods pork processing plant last month in Logansport, Ind. Some of the worst workplace coronavirus outbreaks have been in the meatpacking industry. Major meatpackers JBS USA, Smithfield Foods and Tyson have said worker safety is their highest priority. Michael Conroy/AP hide caption

Thousands Of Workers Say Their Jobs Are Unsafe As Economy Reopens

Thousands Of Workers Say Their Jobs Are Unsafe As Economy Reopens 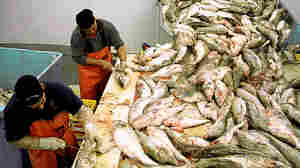 June 5, 2020 • Most of the crew on one massive seafood trawler has tested positive for COVID-19. Other vessels also have cases, despite sweeping measures to try and prevent the spread of coronavirus.