September 30, 2010 • In California, the GOP candidate for governor, Meg Whitman, answers accusations that she knowingly kept an illegal immigrant employed as her housekeeper. Whitman denies it, while attorney Gloria Allred -- who represents the former housekeeper -- introduces a letter that she claims proves Whitman is lying.

September 30, 2010 • Two watchdog groups have crowdsourcing web tools to gather reports on campaign dirty tricks. The Center for Public Integrity and the Sunlight Foundation want citizens to report deceitful robocallls and other practices to their web sites. 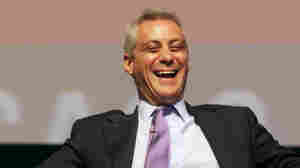 September 30, 2010 • The White House chief of staff is a former member of Congress from Chicago. But several other serious contenders could make bids for the job being vacated by Richard Daley.

September 30, 2010 • Meg Whitman, the Republican nominee for California governor, blamed her rival, Democrat Jerry Brown, for smearing her via the undocumented housekeeper story. Whitman denied exploiting her ex-housekeeper and said she followed the law.

September 30, 2010 • GOP candidate Carl Paladino's angry rhetoric spilled over into a heated confrontation with a reporter in upstate New York. The exchange could be chalked up to stress, but delivering such rage is one of Paladino's main campaign promises.

September 30, 2010 • Congress has left town with a long list of non-accomplishments. Among the proposals getting short shrift from one or both chambers: the Bush-era tax cuts; all 12 annual spending bills; the arms control treaty with Russia; the defense bill; "don't ask, don't tell"; child nutrition; food safety; renewable electricity; Chinese currency manipulation; net neutrality; and cybersecurity. Lawmakers will be back in Washington for a lame-duck session after the midterm elections, where they will face immediate consequences unless they do something about the tax cuts, the spending bills and expiring unemployment benefits.

A Look At Senate, Gubernatorial Races In Illinois

September 30, 2010 • All Things Considered continues checking in on political races around the country. Today, NPR's Robert Siegel talks to Jim Webb, a political editor with the Chicago Tribune, about both the Senate race and the governor's race in Illinois.

A Look At Senate, Gubernatorial Races In Illinois

September 30, 2010 • Chicago sources confirm that White House Chief of Staff Rahm Emanuel will step down Friday to explore a bid for the Chicago mayor's office. Melissa Block talks to NPR's Mara Liasson and David Schaper for the latest.

September 30, 2010 • The longtime administration official and Washington political figure plans to return to his hometown of Chicago to pursue a potential bid for mayor, sources tell NPR.

The Battle For The Senate: Republican Momentum Continues (Add Pennsylvania)

September 30, 2010 • In the latest survey of Senate races, and the first since early September, we show Republicans continuing their momentum -- but they would have to win every tossup seat to have a chance to take control.

Emanuel To Leave White House To Run For Chicago Mayor

September 30, 2010 • White House Chief of Staff Rahm Emanuel will announce his resignation from the Obama administration tomorrow, to run for mayor of the city of Chicago, NPR has confirmed.

Rahm Emanuel, on his political aspirations, from "Charlie Rose."

September 30, 2010 • NY Republican governor candidate Carl Paladino charged that his Democrat rival Andrew Cuomo had marital affairs during a now-defunct marriage and that the media is not probing Cuomo's past the way they are his. 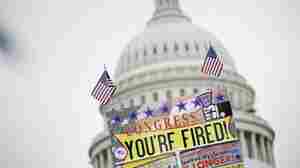 Of course, being "against" the current lawmakers in Congress isn't necessarily a negative thing for many people. Brendan Smialowski/Getty hide caption

It's Not Un-American To Vote 'Against' Things 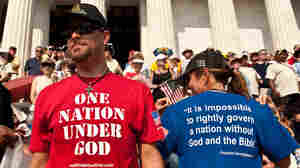 People gather at a rally in Washington, D.C., organized by conservative Fox News commentator Glenn Beck, one of the de facto leaders of the Tea Party movement. While the Tea Party says it doesn't take a stance on religious and social issues, many of its supporters are conservative Christians. Nicholas Kamm/AFP/Getty Images hide caption

The Tea Party In America

September 30, 2010 • The Tea Party's strategy is to stay focused on fiscal issues rather than take a stance on social or religious issues. But that strategy could alienate many of its supporters who identify themselves as Christian conservatives.

September 30, 2010 • Rep. Mike Castle (R-DE) won't run as a write-in candidate in the race for a U.S. Senate seat. It remains a two-way contest between the woman who beat him in the Republican primary, Christine O'Donnell, and Democrat Chris Coons who holds a large lead.