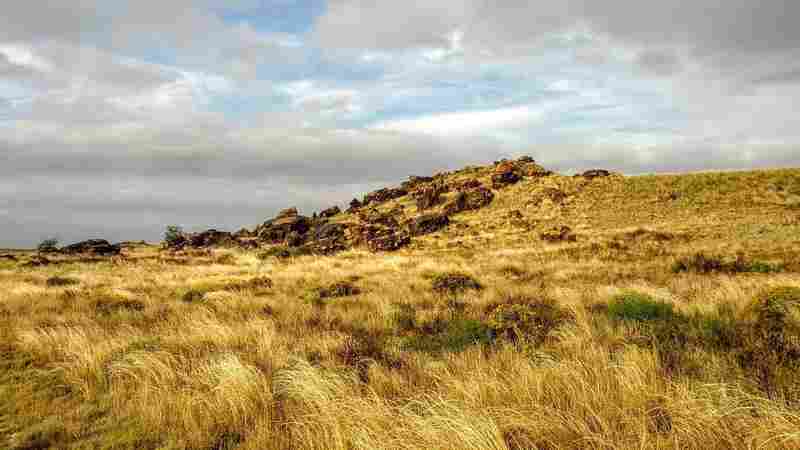 Few large grasslands remain intact. Though they play a huge role in limiting the effects of climate change, they are threatened and tend to have few protections. Tracy Kressner hide caption

September 28, 2022 • What's in a grassland? There are all sorts of wildflowers, many insects, animals like prairie dogs, bison and antelope — and beneath the surface, there's a lot of carbon. According to some estimates, up to a third of the carbon stored on land is found in grasslands. But grasslands are disappearing — just like forests. Today, journalist Julia Rosen shares her reporting on the hidden majesty and importance of the grasslands. 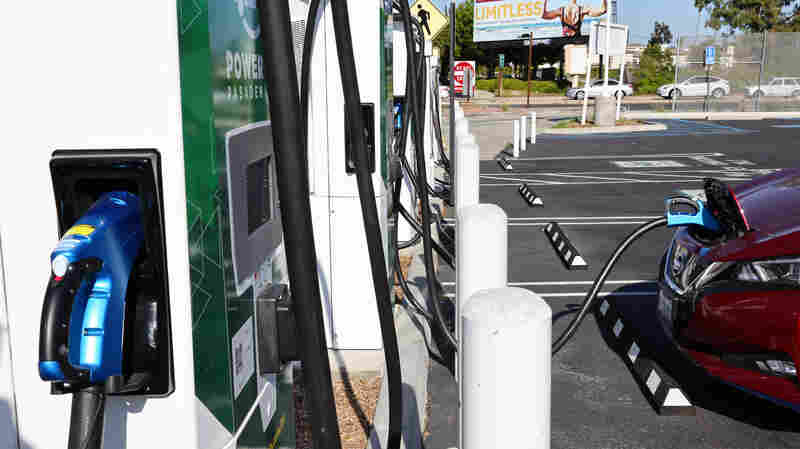 A Nissan electric vehicle recharges at a Power Up fast charger station on April 14, 2022, in Pasadena, Calif. California has more chargers than any other state in the U.S., but the federal government is trying to expand charger access across the country. Mario Tama/Getty Images hide caption

September 27, 2022 • All 50 states, D.C. and Puerto Rico have received the go-ahead to start spending federal dollars on new chargers. The long-term plan is to spend $5 billion improving charging infrastructure. 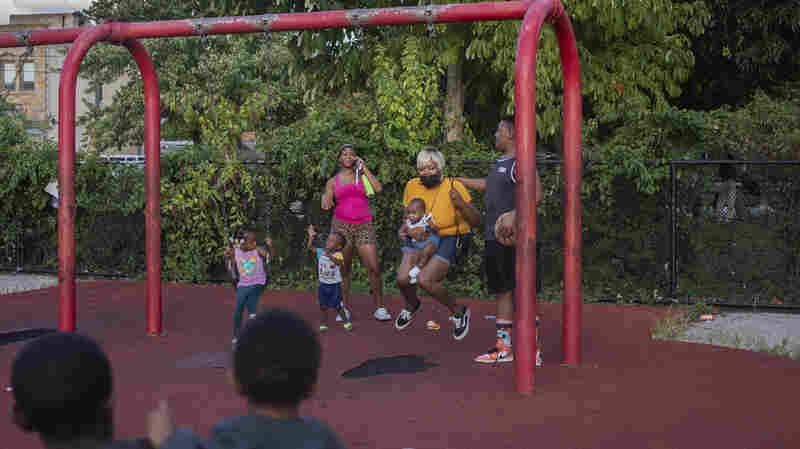 Families gather in a playground with a splash pad and swings in Philadelphia's Fairmount Park. Philadelphia has multiple projects underway to make this and other large parks in the city more resilient to heat and other effects of climate change. Ryan Kellman/NPR hide caption

September 27, 2022 • It's easy to take city parks for granted, or to think of them as separate from nature and from the Earth's changing climate. But the place where many of us come face-to-face with climate change is our local park. On today's episode, Ryan Kellman and Rebecca Hersher from NPR's Climate Desk team up with Short Wave producer Margaret Cirino to spend 24 hours in Philadelphia's Fairmount Park. 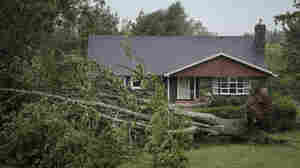 A downed tree from Post-Tropical Storm Fiona sits in the front yard of a home on Sept. 24 in Irish Cove, Nova Scotia on Cape Breton Island in Canada. Drew Angerer/Getty Images hide caption

September 25, 2022 • Fiona made landfall as a hurricane-strength post-tropical cyclone, causing widespread damage in five provinces and leaving more than 190,000 people without power. 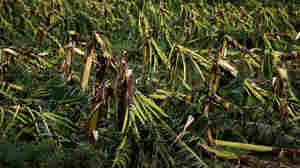 September 24, 2022 • Bananas, papaya and coffee were also affected, according to Puerto Rico's agriculture secretary. The plantain is one of the island's top commodities — and a key ingredient in many traditional dishes. 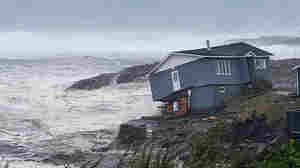 A home faces high winds caused by post Tropical Storm Fiona in Port aux Basques, Newfoundland and Labrador on Saturday. The home has since been lost. Rene Roy/Wreckhouse Press via AP hide caption

September 24, 2022 • Canadian troops are being sent to assist the recovery from the devastation of storm Fiona, which swept away houses, stripped off roofs and knocked out power across the country's Atlantic provinces. 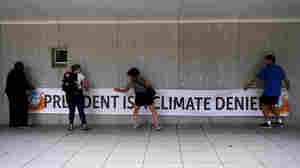 Activists unfurled a banner calling David Malpass a climate denier on the World Bank headquarters after he refused to say if he believed man-made emissions contributed to global warming. Olivier Douliery/AFP via Getty Images hide caption

Climate activists want Biden to fire the head of the World Bank. Here's why 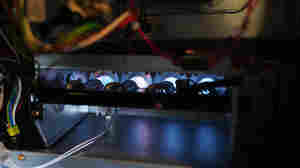 A gas furnace in a residential home. California plans to require zero-emission heaters and furnaces by the end of the decade. Bloomberg/Bloomberg via Getty Images hide caption

California plans to phase out new gas heaters by 2030

September 23, 2022 • The California Air Resources Board approved a plan to phase out sales of new gas furnaces and water heaters in the state by 2030. 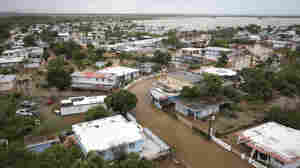 Playa Salinas is flooded after the passing of Hurricane Fiona in Salinas, Puerto Rico, on Monday. Alejandro Granadillo/AP hide caption

September 23, 2022 • Experts say it will still take some time before the public knows the full impact of Hurricane Fiona on Puerto Rico. But early figures indicate a tough road ahead as residents attempt to recover. 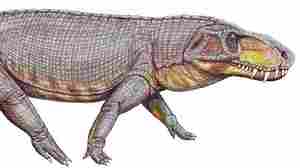 A late Triassic-era rausuchian, one of the rival reptile lineages who lost out to the dinosaurs. Dmitry Bogdonav/Wikimedia Commons hide caption

September 23, 2022 • Dinosaurs ruled the earth for many millions of years, but only after a mass extinction took out most of their rivals. Just how that happened remains a mystery — sounds like a case for paleoclimatologist Celina Suarez! Suarez walks us through her scientific detective work, with a little help from her trusty sidekick, scientist-in-residence Regina G. Barber. 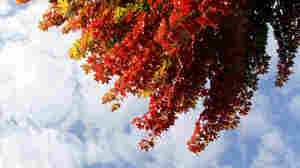 The first day of fall marks the autumn equinox, which is different from a solstice

September 22, 2022 • The first day of the Northern Hemisphere's seasons correspond with the Earth's tilt toward or away from the sun. 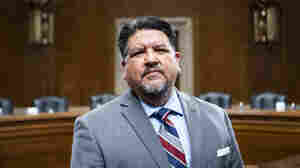 September 22, 2022 • In the final episode of Short Wave's Summer Road Trip series exploring the science happening in national parks and public lands, Aaron talks to National Park Service Director Charles Sams, who recently issued new policy guidance to strengthen the ways the park service collaborates with American Indian and Alaska Native Tribes, the Native Hawaiian Community, and other indigenous peoples. It's part of a push across the federal government to increase the level of tribal co-stewardship over public lands. Aaron talks with Sams, the first Tribal citizen to head the agency, about how he hopes this will change the way parks are managed, how the parks are already incorporating Traditional Ecological Knowledge, and what national parkland meant to him growing up as a member of the Cayuse and Walla Walla tribes on the Umatilla Indian Reservation in eastern Oregon. 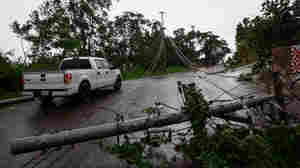 Puerto Rico is in the dark again, but solar companies see glimmers of hope

September 21, 2022 • Around 50,000 solar and battery power systems have been installed on homes in Puerto Rico in recent years, and most seemed to continue working during Hurricane Fiona. 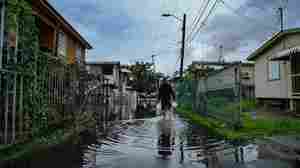 Streets remained flooded in Cataño, Puerto Rico the day after Hurricane Fiona made landfall on the island. AFP via Getty Images hide caption

Why Latinos are on the front lines of climate change

September 21, 2022 • A wide range of Latino communities in the United States are affected by climate-driven storms, floods, droughts and heat waves, and are leading the charge to address global warming. 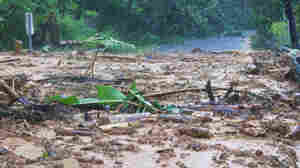 A road is blocked by a mudslide caused by Hurricane Fiona in Cayey, Puerto Rico, on Sunday. Stephanie Rojas/AP hide caption

September 20, 2022 • The U.S. response to Maria was widely seen as wholly inadequate. As the island marks the anniversary of the Category 4 storm, the destruction caused by Fiona has emerged as a test of lessons learned. 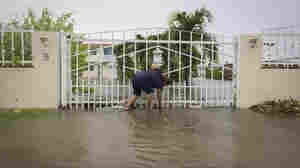 How to help people in Puerto Rico recover from Hurricane Fiona

September 20, 2022 • Several organizations are asking for assistance in helping those impacted by Hurricane Fiona. 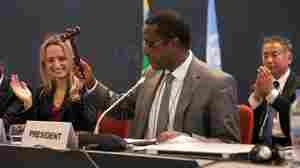 In October 2016, in Kigali, Rwanda, nations around the globe agreed to phase out a category of dangerous greenhouse gases widely used in refrigerators and air conditioners. In 2022, the U.S. took steps to formally ratify the agreement. Cyril Ndegeya /AFP via Getty Images hide caption

September 20, 2022 • The Senate has ratified a climate treaty that would formally phase down the use of industrial chemicals found in air conditioners and refrigerators. 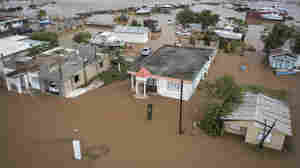 Hurricane Fiona, which made landfall on Sunday, has damaged reservoirs and water filtration plants. Puerto Rico's only water agency is scrambling to restore services, but officials say they're waiting for flooded rivers to subside. Alejandro Granadillo/AP hide caption

Puerto Rico has lost more than power. The vast majority of people have no clean water

September 20, 2022 • More than 760,000 customers have been left with no access to clean running water since Hurricane Fiona struck the island on Sunday. 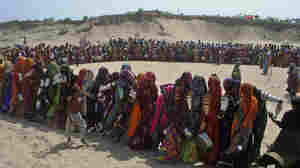 People wait in line for food in Sindh province, Pakistan, on Sept. 19, 2022. The province was one of the hardest hit by recent deadly floods. A new analysis confirms that climate change likely helped cause the disaster. Pervez Masih/AP hide caption

September 19, 2022 • Extremely heavy rain fell in the hardest-hit provinces. About 75% more water is falling during the heaviest rainstorms in the region, according to a new scientific analysis. 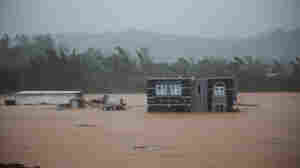 A home is submerged in floodwaters caused by Hurricane Fiona in Cayey, Puerto Rico, on Sunday. Stephanie Rojas/AP hide caption

Battered by Hurricane Fiona, this is what a blackout looks like across Puerto Rico

September 19, 2022 • The governor of Puerto Rico says it will likely take days to fully restore the electricity on the island — but that's contingent upon how much damage the storm inflicted on the power grid. 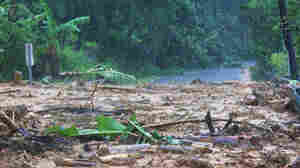 A guide to the types of advisories issued during hurricane season

September 19, 2022 • Watches and warnings are in place across the Caribbean, as Hurricane Fiona has passed through Puerto Rico and is expected to make landfall in the Dominican Republic Monday. 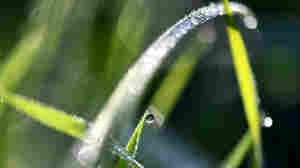 September 19, 2022 • Last week, Lauren Sommer talked with Short Wave about the dangerous combination of heat and humidity in the era of climate change and how the heat index can sometimes miss the mark in warning people how hot it will feel. That reminded us of producer Thomas Lu's conversation about relative humidity with Maddie Sofia. He digs into why some meteorologists say it's important to pay attention to dew point temperature and how moisture in the air and temperature influence the way our body "feels" when we're outside. (Encore) 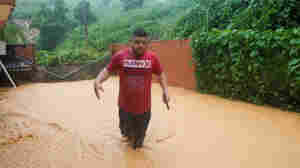 A man walks on a road flooded by Hurricane Fiona in Cayey, Puerto Rico on Sunday. Stephanie Rojas/AP hide caption

Puerto Rico is without electricity as Hurricane Fiona pummels the island

September 18, 2022 • The storm is wreaking havoc on the island's already fragile power grid. Heavy rainfall and catastrophic flooding is continuing across the island. 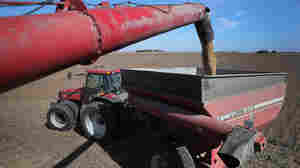 Soybeans pour from a combine during harvest in a field in Rippey, Iowa, in 2019. Joe Raedle/Getty Images hide caption

As farmers split from the GOP on climate change, they're getting billions to fight it 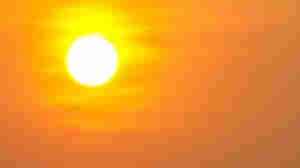 September 15, 2022 • Heat—it's common in summer in much of the world, but it's getting increasingly more lethal as climate change causes more extreme heat. NPR climate correspondent Lauren Sommer talks with Short Wave's Regina G. Barber about how human bodies cope with extended extreme heat and how current information on how hot it feels need updating.